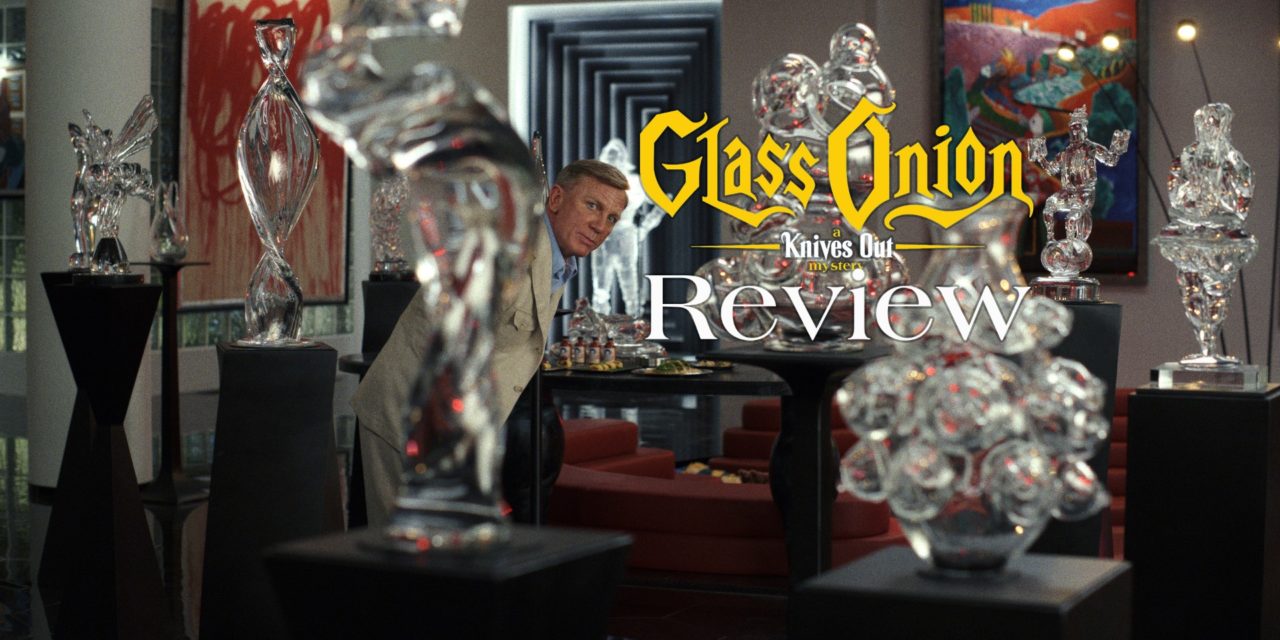 Glass Onion: A Knives Out Mystery is sharper and cuts deeper than Knives Out, and absolutely perfect.

Rian Johnson’s Knives Out was a smash hit that many credit for revitalizing the whodunit genre of film. The film did over $300 million at the box office and Netflix paid $450 million for the next two sequels. The first of those sequels, Glass Onion: A Knives Out Mystery, is out now in theaters and will release exclusively on Netflix on December 23, 2022. The sequel continues to follow the adventures and cases of Benoit Blanc, portrayed by Daniel Craig, as he has a new mystery to solve on a private and isolated island in Greece during the early heights of the pandemic.

The Mystery of Glass Onion

The tricky part about covering a whodunit is not giving away anything. From the synopsis and trailers, it is obvious that Benoit Blanc has a mystery to solve. It all starts off with a murder mystery party hosted by Miles Bron (Edward Norton) for his group of best friends “The Disruptors,” played by: Janelle Monáe, Kathryn Hahn, Leslie Odom Jr., Kate Hudson and Dave Bautista. They are joined by Jessica Henwick, who plays Peg, the assistant to Hudson’s Birdie, and Madelyn Cline, who plays Whiskey, the girlfriend and partner to Bautista’s Duke. What is supposed to be a fun murder mystery weekend, becomes a real murder mystery when someone is murdered.

The Layers of the Glass Onion

While my recap is arguably much worse than the official synopsis, it’s meant to reflect the movie that will be obvious after watching it. Glass Onion’s writing is truly brilliant. It is infinitely symbolic and wonderfully complex. But it is also incredibly simple. It is a true masterclass of writing. The structure, the foreshadowing, the cultural relevance, it is all perfect. There’s no other way to describe it. Aside from just the incredible structures and techniques, it is consistently entertaining and hilarious.

This is all brought to life and enhanced by everything on screen and in the speakers. The genius of the writing is brought to the screen in a way that it feels like the information on screen is being absorbed the same way words are read on the page. There is a lot hidden in the scenery, but also all of the things of importance, whether connected to the mystery or misleads, will be absorbed without any additional effort. Johnson fully controls the audience’s thoughts and emotions throughout the entire film, yet still leaves the guessing completely up to the individual to be right or wrong.

The final layer of Glass Onion that delivers the masterwork of writing, directing, and world creation, is the performers. Each character is distinct and fleshed out, and feels real. Each character feels familiar and recognizable even though all are fictional. Audiences will find someone to relate to and see themselves as, as well as see people they love and hate. This instant connection brings the audiences in, and leads them through one of the best times to be had at the movies.

The Distinct Flavors of the Glass Onion

Every actor is perfectly cast and delivers a spectacular performance. Again, it’s hard to go into specifics without giving anything away. And being a whodunit, the less known the better the experience. But wow. The cast fully embodies their characters and brings them to life. Each actor is thoroughly enjoying going to the extremes of their character’s archetype, yet never feels overdone. In this aspect, Kate Hudson stands out, as Birdie is the most out-there and flamboyant of the characters. Hudson makes an absolute meal with every second on screen and every line. Even if it is just a sound.

RELATED: All Quiet on the Western Front (2022) Review: A Technically Immaculate Bore

Everyone gets their moment, to shine, but Jessica Henwick, Dave Bautista, and Janelle Monáe get to perform parts that are different than we normally see them in. Well maybe not so much Dave Bautista, he’s a chameleon, but he’s a very fun character that uses his massive body for things other than violence. Mainly comedy. Monáe’s performance has to be witnessed to be understood, but chances are audiences will agree on the sentiment, “Wow!” Then there’s Henwick, who perfectly captures what it is like to be a personal assistant. She also has one of the best realization reactions ever to be put on screen.

Jessica Henwick’s Peg is a background character in a very literal sense. The way she is framed, the way she is treated, and overall blocking. But she steals the scene every time. It’s the brilliance of Johnson’s story, but also the incredible talent of Henwick that make it work. This role, despite the great writing, could easily be a literal background actor and extra, but Henwick makes it one of the most dynamic pieces of the puzzle. Also, one of the best reactions in cinematic history. The pure emotion from her realization will reach the soul of every person in the audience.

Glass Onion is a Bonafide Masterpiece of Cinema

Glass Onion: A Knives Out Mystery is a bonafide masterpiece. No matter what aspect is focused on, Glass Onion exceeds all expectations. The writing, the direction, the performances, everything is truly incredible. Rian Johnson and Benoit Blanc have revitalized the genre, continuing the wonder and excitement Agatha Christie started with Hercule Poirot. Johnson’s whodunit will provide audiences with a truly exciting and entertaining movie-watching experience that will inspire multiple revisits even after solving the mystery.

For the absolute brilliance in every aspect of filmmaking, I give Glass Onion: A Knives Out Mystery a 5/5

Glass Onion: a Knives Out mystery is currently in theaters and will release on Netflix on December 23, 2022.

About Glass Onion: a Knives Out mystery

Benoit Blanc returns to peel back the layers in a new Rian Johnson whodunit. This fresh adventure finds the intrepid detective at a lavish private estate on a Greek island, but how and why he comes to be there is only the first of many puzzles. Blanc soon meets a distinctly disparate group of friends gathering at the invitation of billionaire Miles Bron for their yearly reunion. Among those on the guest list are Miles’ former business partner Andi Brand, current Connecticut governor Claire Debella, cutting-edge scientist Lionel Toussaint, fashion designer and former model Birdie Jay and her conscientious assistant Peg, and influencer Duke Cody and his sidekick girlfriend Whiskey.

As in all the best murder mysteries, each character harbors their own secrets, lies and motivations. When someone turns up dead, everyone is a suspect. Returning to the franchise he began, Academy Award-nominated filmmaker Rian Johnson writes and directs Glass Onion: A Knives Out Mystery and assembles another all-star cast that includes a returning Daniel Craig alongside Edward Norton, Janelle Monáe, Kathryn Hahn, Leslie Odom Jr., Jessica Henwick, Madelyn Cline with Kate Hudson and Dave Bautista.

Are you going to see Glass Onion: A Knives Out Mystery in theaters or are you going to wait until it drops on Netflix? Do you usually figure out whodunits? Can you guess from the poster? Let us know your reaction, without spoilers, and discuss the film and your favorites of the genre on social media.

TLDR Glass Onion: A Knives Out Mystery is a bonafide masterpiece. No matter what aspect is focused on, Glass Onion exceeds all expectations. The writing, the direction, the performances, everything is truly incredible. Rian Johnson and Benoit Blanc have revitalized the genre, continuing the wonder and excitement Agatha Christie started with Hercule Poirot. Johnson's whodunit will provide audiences with a truly exciting and entertaining movie-watching experience that will inspire multiple revisits even after solving the mystery. 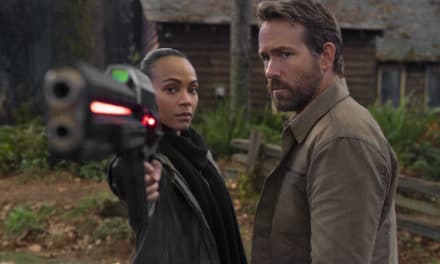 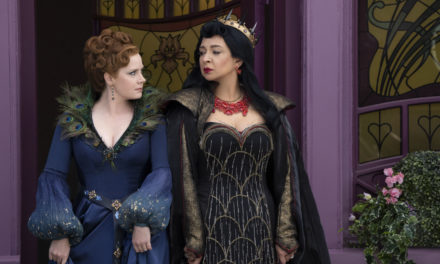 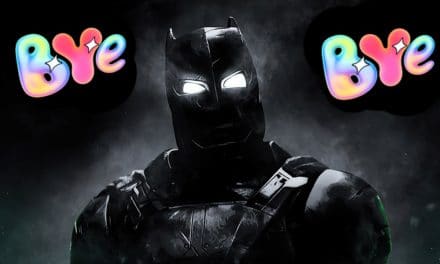