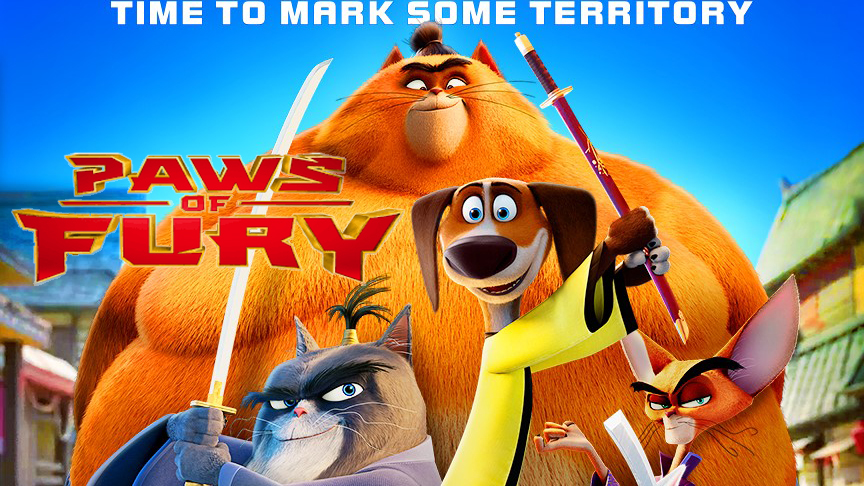 Paws of Fury: The Legend of Hank drops a hilarious new trailer and mini-game.

Paramount Pictures promises comedy, action, and the absolute limit of PG language in its upcoming animated feature film, Paws of Fury: The Legend of Hank. A hapless hound is trained by a retired samurai master in order to save the village from a maniacal warlord. With dedication, heart, and paw-erful allies, Hank (Michael Cera) will use his training from his legendary, but reluctant, master (Samuel L. Jackson) to become the town samurai and save the world from the evil villain (Ricky Gervais). Watch the animated action, hijinx, and hilarity in the film’s second trailer.

Paws of Fury: The Legend of Hank Official Trailer 2

The opening sequence pays obvious homage to Jurassic Park, whose newest installment comes out tomorrow! But the homage geniusly misdirects to a glorious sight gag of a giant sumo kitty riding into town on the tiniest of hogs. I can’t be for sure, but it just feels very Mel Brooks and only heightens the excitement and anticipation for Paws of Fury. In addition to the new trailer, a new mini-game was released that allows players to live out some of Hank’s training.

The game is pretty much a watch and repeat of what Jimbo does. There are four buttons, each plays a unique sound and causes your character to perform a specific action. Memorize the sequence performed by Jimbo then repeat with Hank. It’s a very direct game that provides some fun for all ages. It is kind of reminiscent of PaRapa the Rapper, but without the musical flare that made the iconic game so fun and rewarding. Jimbo’s Samurai Training offers no payoff, and it’s only 6 level.

Mid-mini-game aside, Paws of Fury: The Legend of Hank is looking to be the next great animated feature. If it does well, expect sequels and likely television series spin-offs.

Are you excited about Paws of Fury: The Legend of Hank? Does Samuel L. Jackson’s pushing of the PG rating make you laugh out loud? Do you think PaRappa will be featured or referenced? Let us know what you think in the comments below and share what you think the best joke from the trailer is with us on Twitter.

KEEP READING: The Sea Beasts Reveal the Savage Wonders of the Sea on July 8