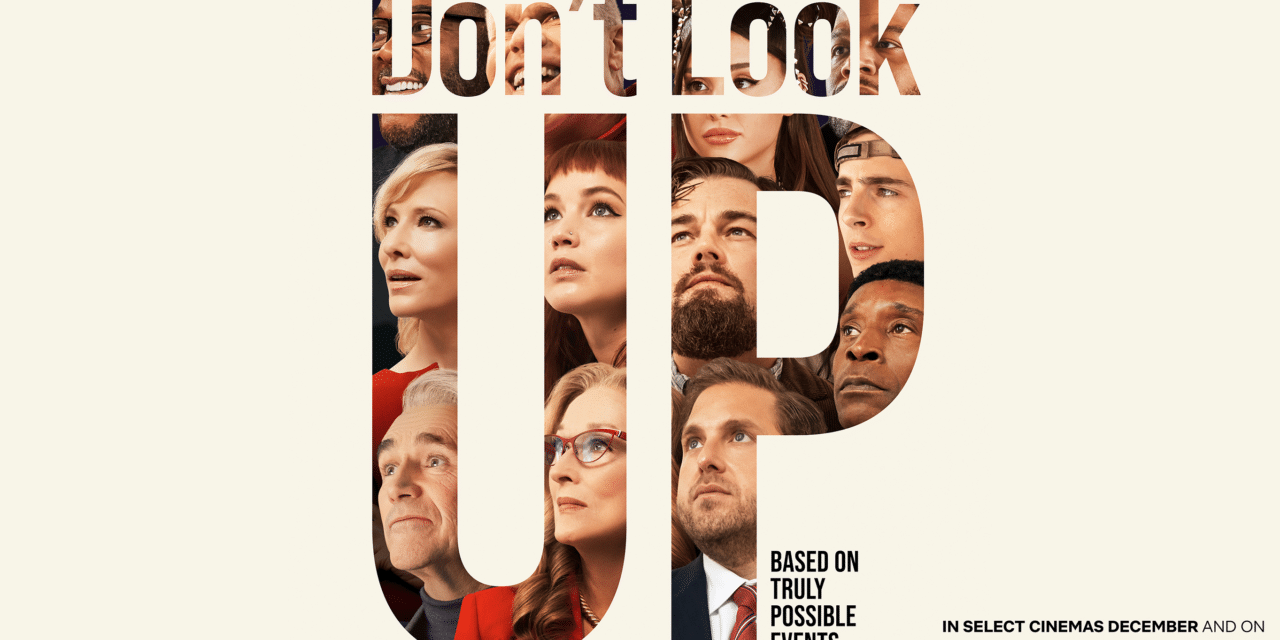 Writer and Director, Adam McKay, tells a hilariously fictional story that depressingly becomes dramatically non-fiction in his Netflix sci-fi dramedy, Don’t Look Up. Read more in our Don’t Look Up review below:

Adam McKay is an award-winning director, screenwriter, comedian, among other things. He is known for his hilariously poignant films that make audiences laugh, think, and understand complex social issues. Films like The Big Short and The Other Guyshilariously informed audiences how major corrupt the investment market is. The Campaign comedically matches the illogical thoughts and actions of the election process. Now with Don’t Look Up, McKay hilariously reflects how fickle, corrupt, and insane our political, social media, and news systems are.

Don’t Look Up is about two astronomers from Michigan State, Dr, Randall Mindy (Leonardo DiCaprio) and Ph.D. candidate Kate Dibiasky (Jennifer Lawrence). Dibiasky discovers a mountain-sized comet while conducting research, which causes their entire department to celebrate the discovery. During the celebration, Dr. Mindy attempts to calculate the trajectory of a comet, only to discover it is headed directly for Earth. Due to its size, collision with the planet would be an extinction-level event. Mindy and Dibiasky fervently check their calculations before attempting to contact NASA and deliver the news.

Only Dr. Clayton “Teddy” Oglethorpe (Rob Morgan), the head of a not-well-known, but actually real, branch of NASA takes them seriously and schedules a meet with President Janie Orlean (Meryl Streep). Though their data is sound and vigorously peer-reviewed and confirmed, the President and her son/chief of staff, Jason Orlean (Jonah Hill), do not take them seriously and decide to table the news until after the elections. This leads Teddy, Mindy, and Dibiasky, to desperately find other means of getting something to happen and prevent the apocalypse.

RELATED: Red Notice Is Now The Most Watched Netflix Film Of All Time

The film follows a distressing cycle of proving the facts to the masses with about half the population disbelieving it. most of which only question the facts because of political spins. Mindy, Dibiasky, and Teddy are the film’s main advocates of acting to save the planet, but all of them fall victim to the social, political, and news systems in some way. The armageddon-level threat’s treatment is comedically and directly reflective of how science and facts are treated in reality, at least in the USA.

Honestly, I was not sure how to approach this Don’t Look Up review. The film is f%!d up in the most Oscar-nominee way possible. For all intents and purposes, the film is astounding. McKay’s films never lack the ability to draw and include top-tier talent. He also brings out stellar performances from everyone, despite the size of the role. Ariana Grande and Scott “Kid Cudi” Mescudi have bit parts that may not get the most screen time, but make impactful contributions to the story every time. Not to mention the comedy and music treasure of “Just Look Up” performed by the pair (embedded above).

Every performance in the film was spectacular and honestly too many to cover in this Don’t Look Up review. Also, most parts were one-note parts that served the story. For example, Jonah Hill’s Jason Orlean was kind of a rich douchebag that was a far more eloquent yet equally idiotic offspring of a rich and powerful parent. But despite the lack of range, the characters were allotted, the performances for all of them are stellar. Rog Morgan’s Teddy is the most steadfast and righteous of the comet provers. Timothée Chalamet brings likability to what is visually meant to be an unlikable character. Mark Rylance seems to have found a great niche as a socially awkward tech billionaire.

RELATED: Don’t Look Up: Leonardo DiCaprio and Jennifer Lawrence Attempt To Save The Earth in New Trailer

The three most developed parts were of Dr. Mind, Kate Dibiasky, and the megalomaniac president, Janie Orlean. These three will get a bit more coverage in this Don’t Look Up review. DiCaprio’s portrayal of Dr. Mindy is a welcomed new side of the actor that is not often seen. DiCaprio is often the coolest guy in the room, but now he’s playing an anxiety-ridden scientist that adjusts from obscurity to relatively DiCaprio levels of fame. The film does its best to distract from his good looks, but eventually relents and makes great narrative use of them.

Jennifer Lawrence is burdened with being the most sane person in the room as Kate Dibiasky. A burdened she makes look light as she effortlessly appears insane by sanely reacting to the situation at hand. She plays the straight part by going funny to the funny parts pretending to be straight. Lawrence absolutely losing her mind at the insane ignoring and downplaying of the end of the world is a depressing pleasure that embodies what I feel to be the point of the film. It’s a masterful flipping of the script that Lawrence absolutely delivers on.

Lastly, Meryl Streep unsurprisingly slays as she embodies a scarily charismatic, selfish, and willfully ignorant President that would unquestionably garner votes from all parties. Regardless of her actions, inactions, and obvious corruption, the reason she is President emanates. She radiates a ridiculous level of leadership despite constantly proving her inability to do so. What President Orlean does emanate, that other like presidents could not convey too many is competence. Regardless of how bad things ended up, you could see the complex thought that went into advancing her own self-interest and the obvious manipulation she deploys to make things happen.

Don’t Look Up being classified as a comedy is apt despite the harrowing message and reality of it. The jokes range from simple crudeness to incredible running jokes that not only resonate because of the humor but the real-life likeliness of it. A minor and out-of-context spoiler about one of the runners, some people are charged an absurd amount of money for snacks they later find out are free. This happens pretty early in the film and is referenced numerous times throughout the film. It is funnier each time it is brought up.

The part that confuses me about this Don’t Look Up review, is that despite absolutely loving the story, the performances, the commentary, and the fact I eagerly look forward to watching it again, I kind of hate it. Even if I wanted to, I could not give this Don’t Look Up review a low score. I love the brilliance of the allegories, the transparent symbolism that might as well be a news broadcast, the slight changes to real-life companies that you wonder why they bothered to change anything. The movie expertly toes subtle and unabashed call-outs that will likely have certain companies calling their lawyers about defamation.

It is directly into the pocket of my preferred type of humor, but I sort of hate the movie. More accurately, the movie fills me with hate. It is too real. The events of the film have likely happened on a somewhat smaller scale and likely continue to happen. The reality of the movie is essentially the current reality of the USA’s political, social, and news systems. If you replace Don’t Look Up‘s comet with Covid or Climate Change, there would be no difference.

I hate Don’t Look Up for being right. I hate it for trying to be more ridiculous than reality yet somehow fall short. I hate it for making me think about how messed up America is. But it is a damn good movie, and I am sure most will agree. The film is immensely aware of how poignant it is with its tagline “Based on truly possible events.” Hopefully the hate the film made me feel me doesn’t tarnish this Don’t Look Up review.

Feeling is not something I would usually include, but the way it resonates after watching the film I felt compelled to mention it It has nothing to do with the production or performances, but it plays into the overall experience. Don’t Look Up is a hilarious fictional film with dramatically non-fictional inspiration. It will have people crying from laughter and then crying from existential realizations. Incredible story, stellar performances, masterclass comedy, it packages existential dread in a thoroughly entertaining and, likely, Academy Award-worthy film.

What do you think of Don’t Look Up? Will you watch it in theaters or wait for Netflix? Or do you want to avoid political content at all costs? Let us know what you think in the comments below or hit us up on Twitter.

KEEP READING: Red Notice Review: Netflix’s Most Expensive Film Production Is a Fun One, But Nothing More