Brian Pillman Jr. Wrestling For AEW And Looking To Validate His Future With MLW And beyond Brian Pillman Jr. discusses his future with MLW and where he hopes to wrestle in MLW’s hiatus.

The newcomer wrestled on the AEW Dark show this week against Shawn Spears [Tye Dillinger].  However, Brian Pillman is still under contract with MLW.

The MLW Chief Operating Officer Jared St. Laurent released a statement on the situation to WrestleZone. Laurent confirmed Brian Pillman is indeed still under contract. Pillman was given permission to wrestle in other promotions because MLW is currently not running shows because of the Covid pandemic. The only requirement being Pillman work MLW shows when the promotion starts up again.

“Brian [Pillman Jr.] is not released and is fully aware of our schedule, which includes events October 3rd and December 5th pending the state of the pandemic. We put the health of our talent/staff and their family and our fans before bookings, which is why we are not running at the moment. We’ve been in contact with Brian to relay this. If he elects to perform elsewhere under the terms of his deal, he certainly has our full blessing to do so,”  St. Laurent said.

Brian Pillman recently told Louis Dangoor of WrestleTalk about being allowed to work outside of MLW because they are not currently running shows. He also spoke about not knowing when the next MLW show would take place and having a lack of security.

“I truly wish MLW all the best in their future endeavors. It appears that they removed me from the roster, which is completely understandable.  But I was never really informed about their status with me. I simply informed them that I was going to go look for other work. No hard feelings, it’s all business, but yeah, they have a lot of great talent and I wish them all the best,” Pillman said.

If the name Brian Pillman Jr. sounds familiar it is because his father Brian Pillman was a wrestler from the late ‘80s into the late ‘90s. Pillman wrestled in Stampede Wrestling, WCW, ECW and WWE.  He teamed up with Stunning Steve Austin before he became Stone Cold and joined the Hart Foundation and The Four Horsemen. Pillman was also a part of a very famous feud with Austin involving a gun and a loud boom.  It’s worth looking up if you have a chance.

Pillman had a promising career ahead of him and seemed to be right on the cusp of becoming a major star in the WWE in 1997. However, on Oct. 5 of that year Pillman died of a heart attack from a previously unknown heart condition. However, his son has continued his legacy and has even adopted the Flyin Brian moniker.

I am looking forward to seeing what he can do in the ring. He was trained by Lance Storm who was one of the most underrated wrestlers of all time. If he is able to prove himself on AEW Dark a lot of eyes will be on him. This could lead him to being signed by AEW or even WWE in the future. 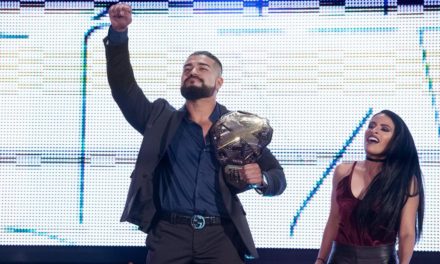 Andrade And Charlotte Flair Speak About About Performance Center, Engagement And Ronda Rousey